Now and Later strain, also known as “Now N’ Later,” is an evenly balanced hybrid marijuana strain variety of Zkittlez. Now and Later gets its namesake from the famous candy and is sometimes known as Now N Later. Now and Later has a sweet, full flavor profile with aromas that are surprisingly earthy and spicy. Now and Later is a creeper strain, which means the high will slowly creep up on you instead of hitting you right away. At first, this strain comes on light and slow but will eventually put you in a sedated state. Growers say this weed comes in small nugs that are round and dotted with orange hairs. Medical marijuana patients choose Now and Later for its ability to fight symptoms related to chronic pain and fatigue.

WHAT STRAIN IS NOW AND LATER?

Now and later is an evenly balanced hybrid [ 50% Indica / 50% Sativa ] marijuana flavor with high THC levels and a CBD content of less then 2%. THC to CBD ratio could be as much as 100:1 if the plant’s CBD content is 0.2% or less. Enjoy this top shelf flavor profile while you bask in the aftermath: vibrant colors, enhanced moods or feelings, thought processes unhampered by worry. Now and later strain is a creeper that takes the best of both worlds, easing you into a relaxed state while still giving you an energizing buzz you can’t get enough of. Minimal CBD levels are met by an ample helping of terpenes that prepare your body for minimal drowsiness. 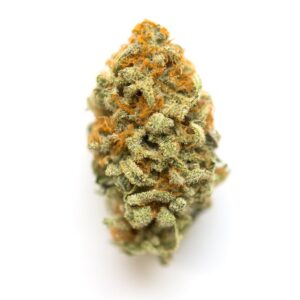 Delicate balance of sweet and sour that you’ve been waiting for. With a complex taste made from bud-derived terpenes and a fruity flavors, this strain was designed to please all types of palettes and preferences.

The smell of now and later weed strain is just as pleasant with an array of fragrances that may change depending on the heaviness of use. This woody strain will transport you to a place of total serenity with hints of herbs and citrusy smell.

When you think of cannabis strains, you most likely start imaging a knock-out indica and nothing else. This hybrid strain provides that same sleepy time feeling with an elevated headspace that will get your creative juices flowing as well. Super heavy smokers beware: this bud has potent effects that may leave you out for the count! Dry eyes, dry mouth and increased energy level are side effects, so have some eye drops and drinks ready.

This strain offers relief from chronic pain and muscle spasms without heavily sedating or slowing you down. Get top-of-the-line medical marijuana strains delivered to your door with us! These are suggestions and are not intended as professional medical advice.

Cannabis seeds can be grown indoors and outdoors, most having a flowering period of 7-9 weeks with an outdoor harvest of mid October. The indica genetics are prominent when growing this strain with an indoor yield of 14oz/ m2 and outdoor yield of up to 15oz/ plant. For best results we recommended to grow now and later seeds in warm and humid temperature ranges with often pruning. Farmers who want high yield year after year use feminized seeds to guarantee that all plants come out female. The flavor is fairly mold and bug resistant. We advise consulting the cannabis community for more grow tips.

There are no reviews yet.

Be the first to review “Now And Later Strain” Cancel reply